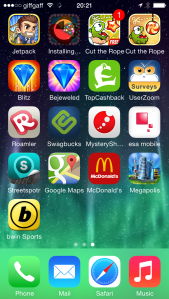 I’ve been watching the first episode of a BBC2 series ‘The Men Who Made Us Spend’- it is all about how consumerism is perpetually driven by product lifespans and ‘upgrades’. Interestingly, the concept of continual obsolescence was dreamt up by the CEO of General Motors in the 1950s. Consumer choice meant giving into what they want- a rainbow of high gloss colours just like nail varnish, different fabrics for seats, vast choice of models for every different budget and a new car range every year, but nothing actually mechanically different. In our modern society, giving objects social value, rather than simply utilitarian value and it is Apple who has taken on this mantle. So, does Apple really believe in great design or just in rolling upgrades to keep the cash flowing in? If you choose to stay part of this consumer culture, then simply- it will continue.

So what can you do to fight this? You could learn how to self-repair! Look up ifixit.com who’s philosophy is that to repair is noble; it creates freedom, it saves you money, saves the environment, it’s sustainable and it creates jobs. They created a special 5 point head screwdriver so you can self-repair your iPhone. In-fact, they have an encyclopaedia on-line of how to repair technology. One way to fight the disposable, throw-away culture of continuous spending.

This is just a mere snapshot of this fantastic programme. If this interests you too, or you want to catch up on previous episodes or just find out more information, go to:
http://www.bbc.co.uk/themenwhomadeusspend

This fab series of programmes is a collaboration between the BBC and the OU, so you can expect high quality!