I’m currently reading this book: The Story of Stuff. How Our Obsession with Stuff is Trashing the Planet, Our Communities, and Our Health – and a Vision for Change by Annie Leonard. 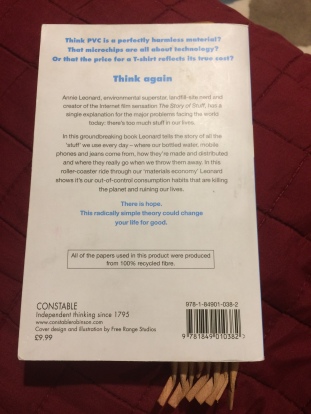 I’m ashamed to say that I picked it up in a charity shop about 4 years ago, started to read it, stopped and then it went back on the shelf for years! Let’s just say it’s quite heavy going and American-centric, but there are a lot of relevant points to anyone, living anywhere in the world.

Today, I was interested to learn of the concept of ‘biomimicry‘. I’m not sure I’ve ever heard that term used and described in this particular way before. But I wanted to make a note of it for future reference. Biomimicry is apparently a trend in modern design, in which designs are influenced by nature.

There is even an organisation called the Biomimicry Institute which has noticed that “nature, imaginative by necessity, has already solved many of the problems we are grappling with. Animals, plants, and microbes are the consummate engineers. They have found what works, what is appropriate, and most important, what lasts here on earth. This is the real news of biomimicry: After 3.8 billion years of research and development, failures are fossils, and what surrounds us is the secret to survival.”

Biomimicry experts have identified the following list of core principles in how nature functions:

So, the art and science of biomimicry takes these principles and figures out how to make human technologies, infrastructure, and products that adhere to them as well.

Some examples given in the book, are that the peacock’s brilliant feathers are not created through pigment, but through shape. They have many layers that allow light to bounce off them in different ways, which translate as colour to the naked eye. I had to Google this a bit further, it’s known as ‘structural colouration’ and was first discovered by Robert Hooke and Isaac Newton (2 English scientists). It describes microscopically structured surfaces, fine enough to interfere with invisible light (sometimes in combination with pigments). So, peacock feathers are actually pigmented brown, as you can see when you turn them over. But it’s their microscopic structure that makes them reflect blue, green and turquoise light and they are often iridescent. Butterflies also use this ‘technique’. Perhaps this could avoid the need for toxic dyes to be created, if we could harness a similar technique?

Mother of pearl is created in cold, salt water – a substance twice as strong as ceramic. Perhaps we could eliminate the use of fossil fuels, in heating kilns to make ceramics? Maybe we could learn to extract metals from cold water?

The threads that hold a mussel shell to a rock naturally dissolve after 2 years. Perhaps we could study this and learn to create compostable packaging? (I think this one is starting to occur, approx 10 years after the book was written).

I’m not a product designer, but I did once study art. I think it’s fascinating to look at the natural world more closely, even if I was just doing it for beauty’s sake. I would have no idea how to create the intricacies of a leaf, for example, with veins running through it to carry water and nutrients, or cells that contained chlorophyll and knew how to grow, and goodness else knows whatever else goes on in there! But I bet there are scientists who could begin to work on these dilemmas. Perhaps artists could work with scientists to create truly beautiful, functional designs that remained harmless to us and our planet?

It seems to me that there is more to being a designer than just knowing about technology, or engineering, or science. Everything in the natural world seems to hold some innate beauty within it too. I can’t help but come back to the Christian ideas of intelligent design or things being created by someone far cleverer than us. Perhaps the plants and animals haven’t found out what works by trial and error over time? Perhaps they were designed that way from the outset? By someone who already knew the delicate balance of the earth’s chemistry and systems? It’s an interesting thought isn’t it?