Another discovery I made when reading my Grandma’s old recipe book is that you can make your own caster sugar! 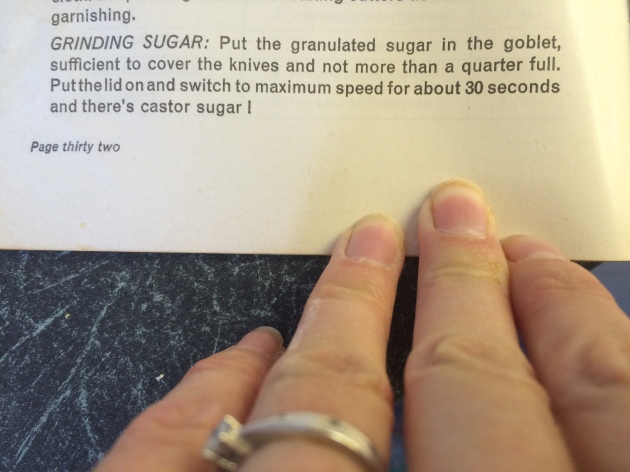 I decided it was about time I gave this a whirl, since to buy 1kg of granulated sugar costs around 60p and the same size bag of caster sugar costs around a whopping £1.50! More than twice the price and for what, a slightly finer grind.

So I got out my liquidiser attachment and thought, here goes nothing. Et voila, I had caster sugar within moments and I shall simply re-use my old caster sugar bag and re-fill it.

I’d really encourage you to give this a whirl, or to try and get hold of a liquidiser/ blender (try eBay or Freecycle) because it could pay for itself in no time.

I think icing sugar might even be possible, so that’s my next experiment. You would just need to whizz it up for a little bit longer to get the finer dust.

Do you already grind your sugar? Is this something you’d be prepared to try? Let me know your thoughts and tips! 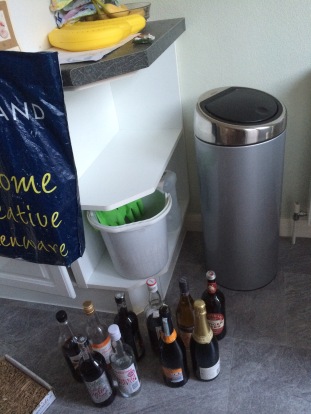 Ever since we moved in, this top end shelf in the kitchen has been home to all our bottles. It’s always hard to know where to put them and we don’t really have any accessible cupboard with deep enough shelves, so they ended up here! The whole shelf was getting disgusting where one syrup bottle had leaked everywhere and just generally dusty. It was time for a clean out!

I ended up throwing half the bottles away – out went Bailey’s, Malibu, some Japanese concoction and a bottle of orange coffee syrup (only what’s left and safe to consume is pictured above). The conclusion for us is- don’t bother buying alcohol or coffee syrups. We so rarely drink them that a small fortune (well a small fortune to me, between £30-£50) had gone off. We had done surprisingly well at giving away most of what we had been given. Our hearts always sink when we receive bottles of alcohol (it usually happens at Christmastime from well-meaning colleagues or occasionally relatives). 2 of the bottles above are gifts – Prosecco and Champagne – neither of which are we likely to consume. To be honest, I don’t know how good to drink either of them are, but I shall offer them to my brother who is likely to drink them. Another is a bottle of Pimms I bought 2 years ago and is about half full – I don’t know if it’s good, but it will also get offered to my brother.

What remains is a bottle of brandy which solely gets used at Christmastime for brandy butter and the Christmas cake. To be honest, when this one is finished I don’t think I’m going to bother making either any more. No-one in this house really likes Christmas cake and often the brandy butter ends up in the bin. A bottle of Vodka which I only purchased recently, to use for homemade disinfectant. It seems to do a brilliant job and will certainly get used up in time. Then we have 2 bottles of non-alcoholic mulled punch which I picked up cheap recently and are good until 2017. I’m looking forward to enjoying those next festive season. We also have a bottle of ginger beer that we were given, it’s also good until 2017 and if we don’t drink it, I know a friend who will love it. The final bottle is a bottle of wine from our wedding, it’s a stupid thing to get attached to but I am slightly. It was a rose, but the colour has changed and I don’t know if it will be any good, especially since we’ve never had a wine rack – so it hasn’t been stored properly (on its side).

So there we go, what to do with all that space – I decided to move my recipe books from the book shelf in the lounge, into the kitchen. I hope they will be easier to get to and in the room where I use them. Many of these get lots of use, although in time I may thin out my collection some more. Because there are so few of them, the bottles have ended up back on the other end of the shelf. Oh well!

One thing I do know is that when we get our kitchen re-designed (one day!) I most certainly will not be installing these stupid shelf ends – they serve no purpose except to gather dust.

Another term I heard on TV this week (I forget where), is the Swedish word ‘Lagom’. This is a uniquely Swedish term for ‘enough’, ‘just the right amount’, ‘in moderation’, appropriate’, ‘not too much, not too little’, ‘adequate’ or ‘sufficient’. I was immediately intrigued and turned to Google to find out more.

They general school of thought is that this word originates circa the Viking era, from the word ‘laget om’ meaning ‘around the team’. The Vikings used to share around a horn filled with wine, for drinking and every had to take just the right amount, so that it could go round everyone.

This word is apparently ingrained into Swedish culture and guides everything they do- from eating and drinking, to their homes and environment. I wonder what we can learn from the Swedes? Would we have a more egalitarian society where we shared the wealth and stopped trying to compete with each other?

Surely there are two-sides to every thing- lagom could be viewed as a positive concept, an embodiment of fairness. But viewed negatively, lagom could be seen to encourage conformity or mediocrity. I think it is quite an affront to our Western, individualistic cultures- particularly those in Britain and America. One might even go as far to say that the idea of lagom is the antithesis of the ‘American Dream’.

I don’t know enough about Nordic culture to comment on how differently they view life. But I do wonder if this is why they seem to have fairer societies, cleaner countries, countries where child care is paid for, parental leave is the norm for both parents and they have a greater focus on green technologies.

I’d encourage you to have a read around the topic if you want a little more depth. Let me know your thoughts!

This post owes its trigger to a retro series lurking on BBC iplayer about architecture. I’m not even sure how I found it now, but it’s entitled Architecture at a Crossroads. Even though this series was first broadcast way back in 1986 it makes some salient points for today. Aside from that, it is simply fascinating and has made me realise what poor programming we are subjected to today. In an hour spent watching this series, I have Googled far more interesting terms than in a week watching today’s TV.

In my hour’s viewing so far, I have had so many thoughts that are relevant to Minimalism that I wanted to try and collect them before they dissipate. Even architecture has gone through a Minimalist phase, but in the 1980s this was starting to reverse as people realised the minimalistic style was bland and soul-less. Contemporary architecture and design has tended to fuse historical and contemporary elements, to give results that appeal to the human soul and are less prison-like. They moved away from boxy, flat-sided designs constructed from concrete and metal frames, back to brick and more detail in the facade (literally ‘the face’ of the building).

One other comment has really struck a chord with me, the narrator of the programme made the statement that a “gregarious society collects”. How intriguing! I think he was referring to our recent preference to look back, in nostalgia rather than forwards to the future. This applies to all sorts of areas of life, but he was referring to our urge to preserve historic buildings of al types whereas in previous societies, they would only preserve the greatest- such as castles or stately homes.

I again Googled this term to find out more, but came up with surprisingly little information. If a gregarious society collects, then surely a minimalist society is the opposite of this? What is a non-gregarious society, I thought? Again, Google yielded almost nothing in response. There was one sparsely populated website that said that the definition of a non-gregarious society is one that ‘does not belong to a flock’, ‘dislikes socialising’ and ‘prefers solitariness’. I thought the latter two sounded a bit negative and not terribly appealing either!

Then I found an old sociology textbook called ‘Mappers of Society- The Lives, Times and Legacies of Great Sociologists’ on Google Books. In a section on the leisure class, there is some information on ‘the beginning of ownership’ ascribed to somebody called Veblen. The author states that if you are non-gregarious, you live season to season. I clearly need to do some more reading, for Veblen was the person who coined the terms ‘conspicuous consumption’ and ‘conspicuous waste’ which are so much a part of what we talk about in Minimalism and Zero Waste today. Clearly his sociological analysis was sharp and ever relevant.

Veblen suggests that as societies moved towards Barbarism (a predatory way of life), they stopped producing items that emulated a more peaceful way of life (such as items related to health care or food production). We became a society that produced goods to act as trophies, to show off. What a compliment to our age; a society that has been able to produce goods that are inefficient, useless or unnecessary, possibly all three at the same time! We presume these trophies signify success. Veblen was really interested in the link between individual ownership and the creation of a leisure class. Now surely that is something we must seek to understand and unpick, if we are calling ourselves Minimalists and hope to move beyond those social constructs?

Veblen stated that “the motive that lies at the root of ownership is emulation”. Meaning that as humans, we have learnt to compare what we have, with what our friends and neighbours have. We have equated the person with the most belongings to be the winner in the face for the best reputation. However, it is an infinite task since you can always acquire more stuff and hence, hope to out-do your neighbour. Thus, we (as humans) have created this social structure based on the foundation of private ownership, through which social honour is gained. Clearly, there is a wave in our contemporary society that is beginning to fight against this and we term it Minimalism.

And unfortunately there, my free e-book preview is curtailed. I am off to try and purchase a copy of The Theory of the Leisure Class (Oxford World’s Classics)

and then perhaps I can post more of my musings. In the mean-time, if any of you are sociologists out there and care to enlighten me further, I would love to hear from you!